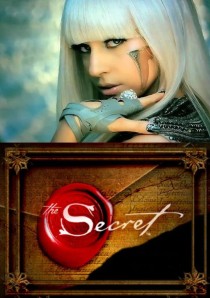 As a guest judge on the television show So You Think You Can Dance, Lady Gaga had this to say: “That’s good that you won a lot of trophies, it’s nice, but you know what? After I sell a bunch of records, I take all the platinum ones off the walls and pretend I haven’t sold a damn one and I’ve got to go do it all again.”

Just like Lady Gaga herself, her motivational advice is controversial. Essentially, she suggests that images of success (e.g., trophies) can take the place of actual successes (i.e., more victories). So instead of going out and making it happen, we reflect on past or imagined glory and do nothing. The symbol replaces the reality. On the other hand we have Rhonda Byrne, the Australian TV ad executive who wrote The Secret.  A perpetual bestseller, The Secret advocates creative visualization, whichinvolves creating vivid and compelling pictures of your heart’s desire, with the aim of drawing this vision toward you. If you believe and even act as if your accomplishments have already happened, Byrne argues, then happen they will.

Who’s right? Lady Gaga has multiple Grammy awards, several world records (e.g., most consecutive weeks in the top 75 music chart), and her sales are approaching 100 million. She is also a master of fantasy, able to imagine herself to sexual culmination at will (a very neat trick indeed). Then again, The Secret has been on the New York Times bestseller list for about 190 weeks and it is endorsed by the undisputed queen of self-help, Oprah Winfrey herself. And though Rhonda Byrne might not have Lady Gaga’s facility at fantasy, her advertising background gives her top marks in understanding the power of images. Let’s let psychological science decide the winner.

The first clear voice on this issue of fantasy was that of Sigmund Freud, who wrote about the “irrational libido,” the part of our psyche that lives for immediate pleasure. To accomplish this, the libido uses what Freud termed a “primary process,” where it “produces a memory image of an object needed for gratification in order to reduce the frustration of not having been gratified yet.” So we imagine everything from revenge to accomplishment and then, without doing anything more, receive pleasure from the image alone. When we mature, we put primary processes in check and graduate to “secondary processes,” which deal with reason and reality. So as adults, we are able to delay gratification and endure the pain necessary to bring our plans to fruition. In short, Freud is definitely a Lady Gaga fan. Images and symbols, such as trophies, may be pleasurable to gaze upon but they can prevent us pursuing the real thing.

Alright, psychoanalysis is more than a century old and not exactly cutting edge science. But we can do better. Over the last decade, Gabrielle Oettingen of New York University has done a string of studies that test the power of fantasy on everything from romantic success to getting your dream job. Her basic design is to have three groups of subjects: a fantasy group, a control group, and a mental contrasting group. Fantasy groups are just that: essentially, proponents of The Secret who imagine they already have their desired outcome. The control group is the baseline, people left alone to their own devices. Then there is the mental contrasting group, basically following a form of Lady Gaga’s recommendation. They mentally contrast by fantasizing about what they want but then immediately afterwards compare where they are now with where they want to be. So if they want a better relationship, they fantasize about being with that gorgeous guy or gal but then deeply reflect afterwards on how they don’t have him or her. The mental contrasting group always ends by contrasting fantasy with reality.

Who wins? Lady Gaga or The Secret? It wasn’t even close. Oettingen’s results show that Lady Gaga-styled mental contrasting always does better than pure fantasy à la The Secret . In fact, they suggest that The Secret is motivationally misguided. The pure fantasy group did worse than the control group, people who were left completely alone. In other words, dreaming actually gets in the way of realizing your dreams.

Does this mean that those who follow The Secret will never get what they want? Of course not, but they won’t realize their dreams as often as the rest of us. That is unless they break the rules; I’ve heard some people gush about how The Secret has worked for them, but what I see is people who have positive expectations about success and then actively go out to pursue their goals. This isn’t The Secret, which advocates that you believe you have already achieved your dreams. As Gabrielle Oettingen puts it, “positive expectations (judging a desired future as likely) predicted high effort and successful performance.” On the other hand, she saw just the opposite with positive fantasies, which led to less effort and worse performance. In short, believing you can do it works; fantasizing you already did it doesn’t.

So here’s the scoop. Fantasy feels good, but when practiced in isolation it gets in the way of accomplishment. It is the motivational equivalent of pornography, where we allow fantasy to take the place of reality. However, if you are good at fantasy, like Lady Gaga, here’s how to make it work the way she does. After fantasizing, focus on your present world and how it lack the things you crave. There will be pain and discomfort because what you long for is no longer in your grasp, but don’t turn away from these emotions; they are a source of power that you can harness to get stuff done.

For more, there is always chapter 7 from my own book The Procrastination Equation. It is dedicated to exactly this subject. And to help you get going, here’s a little more mental contrasting. Think about how helpful it would be to have all these motivational tricks at your fingertips, how much easier your life would be. Now reflect on that it’s going to be same old slog as yesterday because you haven’t read the book yet.

Do you have other celebrity motivational advice? Perhaps some words of advice from LeAnn Rimes or Reese Witherspoon? Let me know and we will give it the same treatment, determining its scientific standing and origins.