This section is starting to fill out nicely, though I have found a lot of lousy poetry on procrastination that doesn’t need to be re-posted. 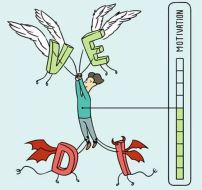 Time (Pink Floyd)
Ticking away the moments that make up a dull day
You fritter and waste the hours in an offhand way.
Kicking around on a piece of ground in your home town
Waiting for someone or something to show you the way.
Tired of lying in the sunshine staying home to watch the rain.
You are young and life is long and there is time to kill today.
And then one day you find ten years have got behind you.
No one told you when to run, you missed the starting gun.
So you run and you run to catch up with the sun but it’s sinking
Racing around to come up behind you again.
The sun is the same in a relative way but you’re older,
Shorter of breath and one day closer to death.
Every year is getting shorter never seem to find the time.
Plans that either come to naught or half a page of scribbled lines Hanging on in quiet desperation is the English way
The time is gone, the song is over, Thought I’d something more to say.

We push time from us, and we wish him back;
Lavish of lustrums, and yet fond of life;
Life we think long, and short; death seek, and shun;
Body and soul, like peevish man and wife, United jar, and yet are loth to part.
Oh the dark days of vanity!
while here, How tasteless! and how terrible, when gone!
Gone! they ne’er go; when past, they haunt us still;

Shun delays, they breed remorse; Take thy time, while time is lent thee; Creeping snail’s have weakest force; Fly their fault, lest thou repent thee; Good is best when soonest wrought, Ling’ring labours come to naught. Hoist tip sail while gale doth last, Tide and wind stay no man’s pleasure; Seek not time, when time is past, Sober speed is wisdom’s leisure, After-wits are dearly bought, Let thy fore-wit guide thy thought.

What happens to a dream deferred?
Does it dry up like a raisin in the sun?
Or fester like a sore – and then run?
Does it stink like rotten meat?
Or crust and sugar over – like a syrupy sweet?
Maybe it just sags like a heavy load.
Or does it explode?

Then a wish,
My best and favourite aspiration, mounts
With yearning toward some philosophic song
Of Truth that cherishes our daily life;
With meditations passionate from deep
Recesses in man’s heart, immortal verse
Thoughtfully fitted to the Orphean lyre;
But from this awful burthen I full soon
Take refuge and beguile myself with trust
That mellower years will bring a riper mind
And clearer insight. Thus my days are past
In contradiction; with no skill to part
Vague longing, haply bred by want of power,
From paramount impulse not to be withstood,
A timorous capacity from prudence,
From circumspection, infinite delay.
Humility and modest awe themselves
Betray me, serving often for a cloak
To a more subtle selfishness; that now
Locks every function up in blank reserve,
Now dupes me, trusting to an anxious eye
That with intrusive restlessness beats off
Simplicity and self-presented truth.
Ah! better far than this, to stray about
Voluptuously through fields and rural walks,
And ask no record of the hours, resigned
To vacant musing, unreproved neglect
Of all things, and deliberate holiday.
Far better never to have heard the name
Of zeal and just ambition, than to live
Baffled and plagued by a mind that every hour
Turns recreant to her task; takes heart again,
Then feels immediately some hollow thought
Hang like an interdict upon her hopes.
This is my lot; for either still I find
Some imperfection in the chosen theme,
Or see of absolute accomplishment
Much wanting, so much wanting, in myself,
That I recoil and droop, and seek repose
In listlessness from vain perplexity,
Unprofitably travelling toward the grave,
Like a false steward who hath much received
And renders nothing back.

This poem has a visual component, so it is best if you go to his site.

There was once an old sailor my grandfather knew
Who had so many things which he wanted to do
That, whenever he thought it was time to begin,
He couldn’t because of the state he was in.

And, thinking of this, he remembered a thing
Which he wanted (for water) and that was a spring;
And he thought that to talk to he’d look for, and keep
(If he found it) a goat, or some chickens and sheep.

Then, because of the weather, he wanted a hut
With a door (to come in by) which opened and shut
(With a jerk, which was useful if snakes were about),
And a very strong lock to keep savages out.

He began on the fish-hooks, and when he’d begun
He decided he couldn’t because of the sun.
So he knew what he ought to begin with, and that
Was to find, or to make, a large sun-stopping hat.

He was making the hat with some leaves from a tree,
When he thought, “I’m as hot as a body can be,
And I’ve nothing to take for my terrible thirst;
So I’ll look for a spring, and I’ll look for it first.”

Then he thought as he started, “Oh, dear and oh, dear!
I’ll be lonely tomorrow with nobody here!”
So he made in his note-book a couple of notes:
“I must first find some chickens” and “No, I mean goats.”

He had just seen a goat (which he knew by the shape)
When he thought, “But I must have boat for escape.
But a boat means a sail, which means needles and thread;
So I’d better sit down and make needles instead.”

He began on a needle, but thought as he worked,
That, if this was an island where savages lurked,
Sitting safe in his hut he’d have nothing to fear,
Whereas now they might suddenly breathe in his ear!

And so in the end he did nothing at all,
But basked on the shingle wrapped up in a shawl.
And I think it was dreadful the way he behaved –
He did nothing but bask until he was saved!

Tell me not, in mournful numbers,
“Life is but an empty dream!”
For the soul is dead that slumbers,
And things are not what they seem.

Life is real! Life is earnest!
And the grave is not its goal;
“Dust thou art, to dust returnest,”
Was not spoken of the soul.

Not enjoyment, and not sorrow,
Is our destined end or way;
But to act, that each to-morrow
Finds us farther than to-day.

Art is long, and Time is fleeting,
And our hearts, though stout and brave,
Still, like muffled drums, are beating
Funeral marches to the grave.

In the world’s broad field of battle,
In the bivouac of Life,
Be not like dumb, driven cattle!
Be a hero in the strife!

Trust no Future, howe’er pleasant!
Let the dead Past bury its dead!
Act,–act in the living Present!
Heart within, and God o’erhead!

Lives of great men all remind us
We can make our lives sublime,
And, departing, leave behind us
Footprints on the sands of time;

Let us, then, be up and doing,
With a heart for any fate;
Still achieving, still pursuing
Learn to labor and to wait.

Story of Three Fishes A Hindu parable from the Mahabharata stating the dangers of procrastination.

Know another good poem, story or song? Please share it!

1 thought on “The Art of Procrastination”